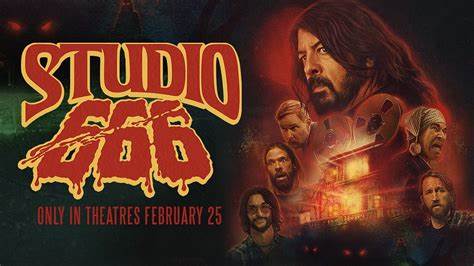 Foo Fighters square off against a host of supernatural ne’er-do-wells in the new trailer for their upcoming horror comedy film Studio 666.

The trailer opens with the band members mulling over different ways to commemorate their upcoming 10th studio album, with Grohl insisting, “We’ve gotta break the mold on this one.” The band moves into a historic mansion in Encino, Calif., to make the record. But while the mansion is beautiful, it also has a foreboding energy. “Do you guys get this overwhelming sense of death?” Grohl asks his bandmates.

You can watch it below.

The mansion — and the supernatural creatures inhabiting it — wreak physical and psychological havoc on the band members as they struggle to finish the album. Demons appear to possess Grohl, who has paranormal nightmares and unwittingly attacks his bandmates.

“After decades of ridiculous music videos and numerous music documentaries under our collective belts, it was finally time to take it to the next level,” Grohl previously said of the film. “Like most things Foo, Studio 666 began with a far-fetched idea that blossomed into something bigger than we ever imagined possible. … Filmed at the same house where we recorded our latest album Medicine at Midnight (told you that place was haunted!), we wanted to recapture the classic magic that all of our favorite rock ‘n’ roll movies had but with a twist: hilarious gore that fucking rocks.”

Studio 666 will hit theaters on Feb. 25. Tickets are available now at the film’s official website.

David Lee Roth has shared a brand new piece of artwork in which he apparently pokes fun at the recent cancelation of his Las Vegas residency. As he has done before, Roth styled the image in the form of a fictional newspaper called The Daily Catastrophe. The picture of an exasperated toad appears under the headline "Due To An Abundance Of COVID!" Earlier this month, Roth issued a brief statement after the cancelation of the remaining […]