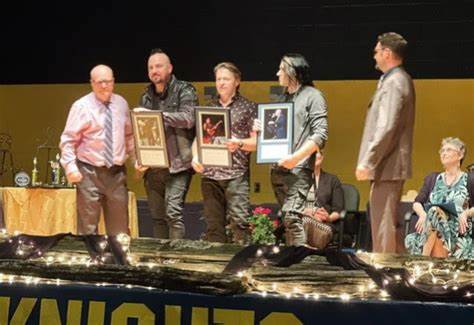 Earlier today, Gontier took to his Instagram to share a photo and video of the ceremony, and he wrote in an accompanying caption: “About last night… thank you so much to Todd Murray, Jason Lean and everyone at Norwood District High School for inducting myself, Brad and @mattjpwalst thanks into their Hall of Honor. And a HUGE congrats to all of the 2022 NDHS graduates.”

In 1992, Gontier, Brad Walst, Phil Crowe, Neil Sanderson and Joe Grant formed GROUNDSWELL while most of the members were still in high school. That band broke up in 1995, but two years later Gontier, Sanderson and Walst reformed as THREE DAYS GRACE. Gontier left the band in 2013 and was replaced by Matt, the vocalist from another Norwood band, MY DARKEST DAYS.

In a 2007 interview with The Oklahoman, Gontier said that he met some of his first bandmates while they were freshmen at Norwood District High School.

“I ended up hooking up with Brad because we had the same love of music,” Gontier said. “He didn’t play anything at the time. I suggested him getting a bass, and he did.”
Gontier said that Canadian bands, including THE TRAGICALLY HIP and OUR LADY PEACE were early influences, along with the Seattle rock scene, particularly the group SUNNY DAY REAL ESTATE.

Gontier initially went into rehab in 2005 in Toronto after admitting an addiction to Oxycontin. The rehab stint influenced some material which would appear on THREE DAYS GRACE‘s “One-X” album, including the songs “Pain” and “Over And Over”.

Gontier left THREE DAYS GRACE in the spring of 2013. At the time, the Canadian rockers cited unspecified “health issues” when his departure was announced. Adam later released a statement explaining he exited THREE DAYS GRACE to pursue new projects, and not to deal with addiction.

Gontier is currently a member of SAINT ASONIA, which also features STAIND guitarist/founding member Mike Mushok. The band will release a new EP, “Introvert”, on July 1 via Spinefarm. The quartet is rounded out by Cale Gontier (bass) and Cody Watkins (drums).

THREE DAYS GRACE‘s latest album, “Explosions”, was released on May 6 via RCA Records. The LP’s first single, “So Called Life”, was No. 1 on Mediabase‘s Active Rock chart and Billboard‘s Mainstream Rock Songs chart. This was the band’s 17th No. 1 song on the Mediabase chart and 16th No. 1 on the Billboard chart, and tied the internationally acclaimed and multi-platinum certified Canadian band with SHINEDOWN for the artist with most #1’s on the Billboard chart.

A video walkthrough tour of the newly opened Kiss World museum in Las Vegas can be seen below. The 2,000-square-foot expansion of the glow-in-the dark attraction Kiss By Monster Mini Golf at the Rio Hotel & Casino is attached to what is a 15,000-square-foot KISS-themed space in Masquerade Village. "My personal collection is gonna be at the Rio hotel, and it's gonna be a chance for all the fans to go up there and see […]