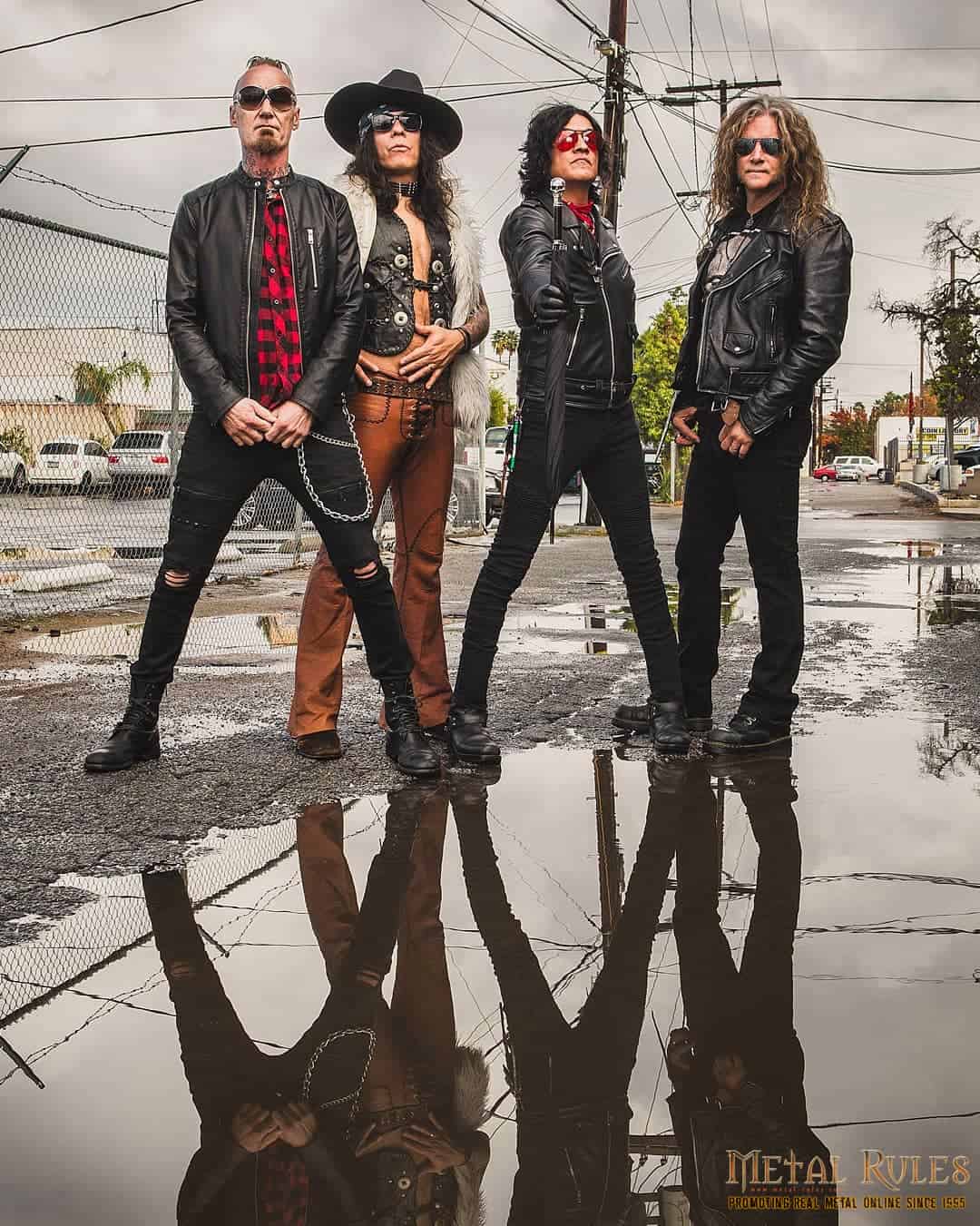 Says Torien: “I am so excited and proud of this amazing and rad song! We have been working diligently on presenting a new body of work to all of our fans that have been so loyal and loving to me and us all these years!!

“In life, God closes doors and opens up new doors to walk through with grace, excitement and passion!!

“I am so blessed to have an amazingly awesome and magical band that will blow everyone’s mind!!”

Adds Black: “I’m super stoked to unveil our new video/single to the world! We as a band started planning this a few days after our first show together, and it’s absolutely incredible to see it coming to fruition. We assembled the perfect team of people to make it all happen and I’m grateful to everyone involved in the planning, execution, and belief in our vision. Also, a perfect title for the state of the world… Holy F*ck! Brace yourself!”
Upcoming shows:

BULLETBOYS‘ latest lineup made its live debut in January at RokIsland Fest in Key West, Florida. Torien launched the new version of BULLETBOYS after the band’s original lineup fell apart following a two-year reunion. Original bassist Lonnie Vencent failed to show up for a scheduled BULLETBOYS performance at the Whisky A Go Go in West Hollywood, California in December, forcing the gig to be canceled. Torien instead delivered an acoustic set with Black. It was later announced by guitarist Mick Sweda and drummer Jimmy D’Anda that they would not be returning to the band.

In January, Sweda discussed his departure from BULLETBOYS in an interview with Waste Some Time With Jason Green. When asked if he informed Torien about his decision to exit the group after BULLETBOYS‘ canceled concert at the Whisky A Go Go, Mick said: “I think that [Marq] pretty much expected that that was gonna happen. Who’s to say that this wasn’t part of a plan, in the beginning, that at the first opportunity he was going to find a way to go back to having his subservient musicians playing. I don’t know. It’s hard to say. And frankly, it doesn’t interest me at all at this point.

“Frankly, I feel a huge sense of relief and a sense of weight lifted off my shoulders every time I leave this band [laughs], because it can be nerve racking and stomach churning,” he continued. “And there’s no need for it in my life at this point. I’ve got plenty of other things I could be doing. So that’s what I will be doing.”

Sweda went on to say that he “always felt like” he “was spending more time doing damage control” than he was enjoying his time as a member of BULLETBOYS.

“It’s funny, people are, like, ‘Well, dude, just go play music. Why can’t you guys just get together and you go out and have fun and play music.’ Well, were it so easy,” he added.

“The shows were great. We were having a great time. People were responding,” he said. “It seemed like there was a potential for an upward trajectory. And as soon as — and these aren’t my words; this is somebody who’s very close with us and observing it… It’s, like, ‘When you guys are in a room, everything seems to be great and you’re having fun. As soon as everybody gets apart, that’s when the voices in people’s ears start speaking and the noise starts to have an effect. And, really, that’s the way it was — as soon as we finished the gig, that’s when everything started to slide downhill.”

Sweda previously opened up about his departure from BULLETBOYS in an interview with “This That & The Other With Troy Patrick Farrell”. Speaking about why the reunion of BULLETBOYS‘ original lineup didn’t last more than two years, Sweda said: “You go into these things with what I’d describe as hope but it’s kind of qualified hope. You know that there’s a shelf life, you know that there’s a ‘use by’ date, or at least ‘best use by’ date, and you just hope it doesn’t come too soon. And for me, frankly, it came too soon. I was really looking forward to the year and all the shows we had booked and looking forward to going out and having a great time this summer. We were thinking that the [aborted] Whisky show [on December 16] would be something that would sort of pull us together after a tough 2021 and something that might sort of create bond that would carry over, and alas, that was not to be. We had a couple of guys that were really important to the functioning of the band, namely the manager and the drummer, that decided that they didn’t wanna move on and be a part of it. So, essentially my decision was made for me at that point.”

Regarding the personal differences that ultimately caused the reunited BULLETBOYS to fall apart, Mick said: “It’s very difficult to explain. I know there’s a lot of external noise, I know that there are voices whispering in everybody’s ear, and once everybody gets away from that buzz [from playing together], it starts to set in. I’m not gonna speak for anybody else, but you start wondering what’s happening. And then you hear something happened and somebody did this or somebody did that or said this, and it all just starts manifesting in this… I suppose it is insecurity, I suppose it is distrust. And for me, I have to be able to trust the guys in my band; I have to be able to know that somebody isn’t gonna go behind someone else’s back and say something or do something. And that just starts to dissipate, I suppose, with the time away. It’s funny — when you get back together, all of that just sort of subsides into the background because there’s a bigger goal in mind and a bigger picture; you want to achieve that and you don’t wanna let everybody down. So it’s easy to overlook that. But there comes a time where it just feels like it’s toxic and poisonous, and nobody needs that in their life, especially at our age.”

Sweda went on to say that he has had no direct conversations with Torien since he made the decision to leave BULLETBOYS. “I didn’t have to speak with Marq,” he explained. “The way that played out pretty much spoke volumes for me, and there was nothing else to be said. My understanding is that he’s already looking at putting together a group of fellows to go out and do there dates. My big concern is that when people see Jimmy‘s picture or see my picture out there, I just want them to know that that is not gonna be the case and they’re not gonna see the original band. And there’s no guarantee that that artwork and those photos won’t be out there representing the gigs as such. So as long as everybody knows what ticket they’re buying and what to expect, I’m okay with that.”

When Sweda first discussed his exit from BULLETBOYS during a January 3 Facebook Live stream, he said: “In the past, I know it’s been brought up that anybody who isn’t in BULLETBOYS has quit on the fans. And that may or may not be something you’ll hear in interviews or whatever. And trust me, it has nothing to do with quitting on fans and everything to do with just not wanting to travel down a path that is fraught with strife and distrust and bitterness and everything else.

“It’s really, at this point in our lives, imperative — at least for me; I’ll speak for myself here — that I just remove all forms of toxicity,” he explained. “And I’m sure all of you understand it just can’t be a part of my life anymore. And the fact that we were all original and having some good shows and having a great time playing the shows — there’s no doubt about that; I had a wonderful time and I was looking forward to doing it all of 2022 — but once it gets to a point where it’s poisonous, you can’t have it in your life…

“I’m grateful that everybody understands, and I apologize to you. I was really looking forward to this being a nice run, being a nice year and finding a way to make our way through it. But that is not to be.”

The original BULLETBOYS lineup made its live return in December 2019 with a sold-out performance at the Whisky A Go Go in West Hollywood, California.

Aside from one show in 2011, original BULLETBOYS members D’Anda, Sweda, bassist Lonnie Vencent and Torien had not performed together since 1993.

BULLETBOYS formed in 1988 at the very peak of the Los Angeles glam metal movement. As a collection of talented musicians, BULLETBOYS were able to quickly capture the attention of music fans around the world. Unlike other rockers of the day, the BULLETBOYS possessed more hard rock-blues fusion than pure hair metal. Thanks to comparisons to the likes of AEROSMITH and VAN HALEN, talent scouts came running and the band quickly received their first major label contract.

BULLETBOYS‘ self-titled debut was released in 1988 via Warner Bros. and peaked at number 34 on the Billboard 200. The album spawned two hit singles, a cover of the O’JAYS classic “For The Love Of Money” and “Smooth Up in Ya”, both of which charted on the Mainstream Rock chart and saw regular airplay on MTV. BULLETBOYS went on to release two more albums, 1991’s “Freakshow” and 1993’s “Za-Za”, before splitting up. 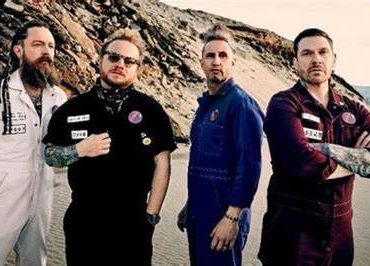