Ozzy Osbourne sat down with co-host Billy Morrison for another episode of “Ozzy Speaks” on SiriusXM‘s Ozzy’s Boneyard. During the chat, Ozzy confirmed that he has spent the last few months working on the follow-up to 2020’s “Ordinary Man” LP.

“Some interesting people are gonna be on the album, which I can’t really disclose,” he said.

Osbourne also spoke about what it’s been like to work with Andrew Watt again after previously collaborating with the producer on “Ordinary Man”.

Asked if he still gets excited about making music, Ozzy said: “Of course I get excited. It’s something that’s creative that I can get my head around. When I get something really special, I go, ‘Yes, this is a winner.’ There’s one [song] called ‘Patient Number Nine’. It’s one we wrote about Sharon [Osbourne, Ozzy‘s wife/manager] and I.”

In December, Watt told Guitar World that he and the BLACK SABBATH legend were “halfway through” the new LP. “There’s some songs on there that are like eight or nine minutes long that are these really crazy journeys. I’m really excited about it,” he said.

“There’s a bunch of people involved,” Andrew told Guitar World. “I can’t say for sure until the end, but I started doing a bunch of basic tracks with Chad and Robert Trujillo [METALLICA], who used to play in Ozzy‘s band. And Taylor Hawkins [FOO FIGHTERS] also came in and played a bunch on the record as well, which adds a different flair — it kind of harkened back to Ozzy‘s ’80s era, in a great way. And I think it’s so cool for a rock fan to be able to listen to half an album with Chad Smith on drums, and then you flip it over and you get to hear Taylor Hawkins. And you know, the last album was really special for everyone involved. And so there was no point in Ozzy or me doing this again unless we thought we could bring something new to the table. And I feel like we’re achieving that.”

Last July, Ozzy said that he was still “not back to 100 percent” after suffering from several medical issues last year, including a fall, neck surgery and hospitalization for the flu. Ozzy also said that he was looking forward to performing again once he has regained his health and the coronavirus pandemic has subsided. The BLACK SABBATH singer had previously canceled all his 2019 tour plans, and the rescheduled 2020 shows were also scrapped.

In May 2020, Ozzy‘s son Jack said that his father will “probably” retire “within the next five to ten years.” But Ozzy, who turned 72 in December, has repeatedly said that he is not calling it quits, despite the fact that his “No More Tours 2” — whenever it ends up happening — is being billed as his last major global trek.

Ozzy was also forced to cancel an April 2020 trip to Switzerland to see a doctor who specializes in treatment of Parkinson’s disease. The singer revealed early last year that he was diagnosed with the condition. 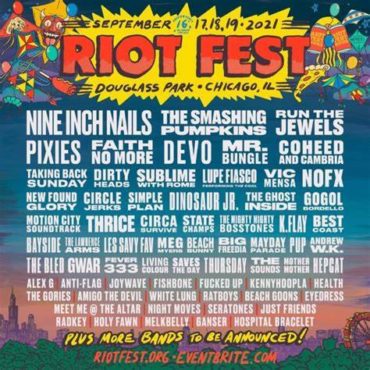 NINE INCH NAILS, FAITH NO MORE And MR. BUNGLE Among Additions To This Year’s RIOT FEST

Rock And Roll Hall Of Fame inductees NINE INCH NAILS will headline the festival's 2021 edition, alongside the SMASHING PUMPKINS and RUN THE JEWELS. New additions for this September's festival include FAITH NO MORE, a recently reunited MR. BUNGLE, DEVO, NOFX, DINOSAUR JR., THE GHOST INSIDE, MOTION CITY SOUNDTRACK, along with many others. 2021 attendees are no doubt ready for the return of NINE INCH NAILS, whose striking headlining set at Riot Fest 2017 was widely regarded as one of the best performances in the festival's […]