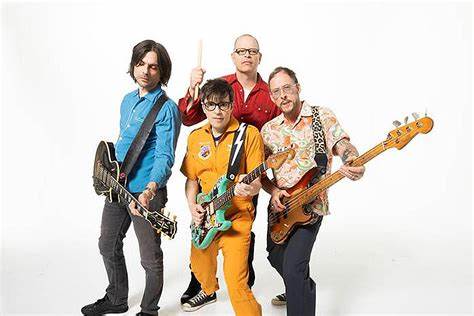 If you thought Weezer turning around two albums in the first half of 2021 was an accomplishment, you should see what they have in store for 2022. During an appearance on Good Morning America (seen below), singer Rivers Cuomo revealed that they have four new albums coming in 2022 with a bit of a theme.

“I guess I’ve had a lot of time on my hands so I wrote four albums that we’ll put out next year,” the singer stated. “It’s called Seasons, and each album comes out on the first day of the season. Spring is kind of like happy chill. And then we move through to dance rock, like a Strokes-style album for the fall, and then sad acoustic, Elliott Smith-style for winter.”

Weezer remain one of rock’s most prolific acts, issuing 15 albums since their arrival in 1994 with their self-titled “blue” album. OK Human arrived in late January this year while the more rock-influenced Van Weezer followed in May and 2022’s four Seasons albums will bring the band’s total to 19 albums.

While four records are on the books, Weezer will find time to support their 2021 output with the Hella Mega tour finally getting underway after a pandemic delay. The group is hitting U.S. venues with Green Day and Fall Out Boy this summer with the next show taking place this Saturday (July 24) in Dallas. See all dates and get ticketing info here.

"Nothing To Lose - A Stephen Pearcy Rockumentary" is available now on ASY TV on Roku, Apple TV, Amazon Firestick or at ASYTV.com. Follow RATT singer Stephen Pearcy's story from his childhood home in San Diego to the world-famous Whisky A Go Go in Hollywood, eventually finding platinum success and playing to sold-out arenas around the world. Check out a trailer below. Last month, Pearcy spoke to Vintage Rock Pod about his upcoming follow-up to 2018's "View To A Thrill" solo album. He said: "So much time […]