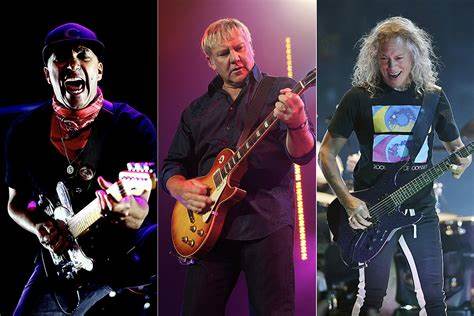 “I think this is a project that he’s working on with a bunch of different musicians,” Lifeson tells UCR. “I don’t really know what the future holds for it, but I really loved doing it.”

Morello is a longtime Rush fan who campaigned for the band to be inducted into the Rock & Roll Hall of Fame. In 2015, he and Lifeson played doctors (along with Rush’s Geddy Lee) in a video for the song “Voodoo” by Future User, a group including Morello’s RATM bandmate Tim Commerford.

“[Rush’s] musicianship was very important to me as an aspiring guitar player,” Morello told the Times-Colonist in 2013 prior to Rush’s Rock Hall induction. “They eschewed some of the cornier trappings of hard rock music — the devil stuff and the groupie stuff, which I could never really relate to. And three of the greatest players were somehow in the same band. Their music was just very compelling to me.”

Morello kept things simple for his new project, sending over a couple of different riffs as a starting point for Lifeson. “He said, ‘Put whatever you want on it – the more the merrier,’” Lifeson recalls. “He was going to give it to Kirk Hammett, and Kirk was going to do the same thing.”

Still, Lifeson didn’t stick to his usual playbook for his contribution. “Being the contrarian, I did all of [these other styles], not just heavy rock stuff,” he says. “We were all talking to each other while we were doing it, and we just had such a riot. I sent my stuff in and it went to Kirk then, and he sent his stuff in.”

Lifeson recently heard an early mix of the track and was thrilled with the result. He thinks fans will dig it, too. “It’s really some fun music,” he notes. “It’s so Tom Morello, his parts. I just smiled the whole way through listening to it. I thought it was really, really cool the way it turned out.”

And even though Morello most likely meant the song to be a one-off collaboration for the trio, Lifeson, for one, is up for more. “I’m hoping that he might have something else to send along,” he says. 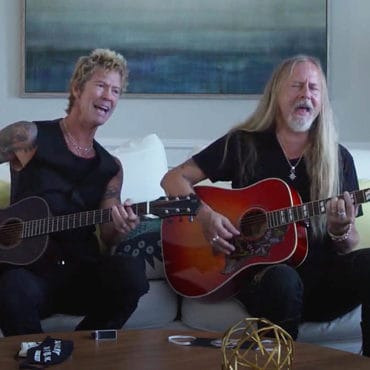 On Sunday (June 27), ALICE IN CHAINS guitarist/vocalist Jerry Cantrell and GUNS N' ROSES bassist Duff McKagan were reportedly at a photo studio in Los Angeles shooting a video for a single from Jerry's upcoming solo album. A couple of photos from the set of the video shoot — courtesy of a woman who appears to be starring in the clip — can be found at this location. Cantrell's brother has said on social media that the album is due in October, […]