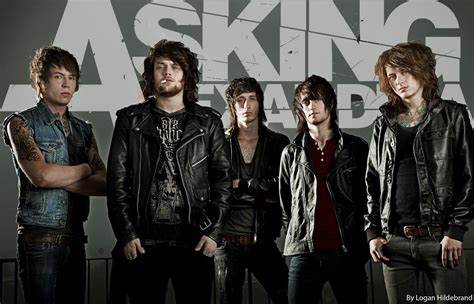 Acclaimed British rock group ASKING ALEXANDRIA is celebrating its first-ever No. 1 at U.S. active rock radio with hit single “Alone Again”, taken from its new seventh full-length studio album “See What’s On The Inside”. The song officially appears at the top of Mediabase‘s chart for the format, dated November 6, 2021. The album is the band’s first official release since the news of their new global deal with Better Noise Music earlier this year, when they were signed by label president Dan Waite out of the company’s London office. The song was released in August to critical acclaim from the likes of Forbes, NME, Loudwire and more, and it immediately became the band’s fastest rise to the top 10 at U.S radio in their career. It also had the biggest first streaming day and week in the band’s history and was a fitting first offering from the new album, which is a passion project from a band who very much fell back in love with making music and with being bandmates while writing and recording in Nashville earlier this year. “Alone Again” not only started a new chapter for the band musically, it has also translated to global success where international streaming has grown to now 66% of their listenership, according to Spotify. “See What’s On The Inside” made a top 10 Spotify debut in both the U.S. and the U.K. upon release.

The band’s lead guitarist Ben Bruce said: “We are so excited and so proud to have achieved our first-ever No. 1 single at active rock radio. We’ve worked so hard to finally get here and to have the number one rock song in America truly is a momentous occasion for us! Thank you to rock radio and everyone else for cranking ‘Alone Again’ with us, and thank you to our team at Better Noise for helping us achieve this goal.”

The band’s manager Diony Sepulveda, veteran talent executive, added: “ASKING ALEXANDRIA signed to Better Noise to work with Allen Kovac and his team in international markets and to reach new heights at both radio and streaming. A big thank you to Allen, Jackie Kajzer [SVP/head of radio promotions], and the rest of the Better Noise team for the band’s first No. 1 at active rock radio.”

Alongside the release of the album last month, the band premiered the official music video for second single “Never Gonna Learn”. As they recorded this album together during quarantine, the visual, directed by Wombat Fire, showcases the band performing the song in an intimate setting interspersed with polaroid images of the session. The song will impact U.S. radio in January as the official second single from the album.

The band is fresh off their tour with A DAY TO REMEMBER, which wrapped this past Saturday, November 6 in St. Augustine, Florida, after over 25 stops in North America since September. Earlier this month, they announced that label mates ALL GOOD THINGS and rock band POP EVIL will join them on their headlining European tour in spring 2022, with tour dates set from March 30 to April 15.

L.A. GUNS is in talks to embark on a U.S. tour with Tom Keifer and FASTER PUSSYCAT. The news of the summer 2022 package was revealed by L.A. GUNS singer Phil Lewis in an interview with "On The Road To Rock With Clint Switzer". While discussing L.A. GUNS' plans to hit the road in support of their upcoming album "Checkered Past", Phil said (as transcribed by BLABBERMOUTH.NET): "We made a pact, we said that we weren't gonna do any shows until the record drops. […]