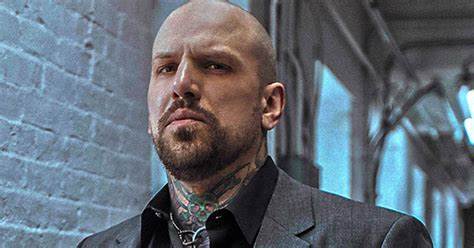 Laskiewicz has carved out an impressive career for himself over the last 15-plus years, most notably as a founding member and lead guitarist of metalcore band THE ACACIA STRAIN, of which he was a member from 2001 to 2013. A talented songwriter and producer, he’s also worked on projects with ALL THAT REMAINS, LEGION, FOR THE FALLEN DREAMS and collaborated with BAD WOLVES on their 2019 studio album “N.A.T.I.O.N.”, where the creative relationship with the band started.

BAD WOLVES are led by drummer and co-founding member John Boecklin, who has honored his commitment to the band’s fans by continuing with the group when the previous singer, Tommy Vext, quit in January 2021.

BAD WOLVES broke the news of Laskiewicz‘s addition to the band via a statement on social media earlier today. The group wrote: “We are excited to officially announce that BAD WOLVES has a new singer — Daniel ‘DL’ Lasckiewicz. DL is a tremendous songwriter and singer, and we can confidently say that the album we are working on, titled ‘Dear Monsters’, is the best BAD WOLVES album to date.

“DL is one of the most talented and hard-working people we have ever had the pleasure to know. He is a team player, a creative force, and overall a great human being who fits perfectly with our BW family. It feels incredible to be surrounded with such positive energy and the music we’ve made is certainly reflective of this new-found optimism and collaborative spirit. This new album shows a more cohesive and unique reflection of the band. There is a lot to prove and expectations are high with a new singer coming in. And we nailed it. The songs speak for themselves, and if you’re a BAD WOLVES fan we know you won’t be disappointed.

“So much has happened since Tommy publicly quit BAD WOLVES a few months ago — and we disagree with the validity of much of what he has said publicly about our parting of ways — but we would prefer to not look back on the past and instead focus on this new chapter. And most importantly, we’d like to let the music speak for itself.

“Thanks for believing in BAD WOLVES and please join us in welcoming DL to the family. We can’t wait for you to hear what’s coming.”

Vext originally announced his exit from BAD WOLVES in a since-deleted Instagram Live video, insisting that he was forced out by his former bandmates and record label, Better Noise Music, over his conservative political views. The singer also announced plans to launch a solo career while claiming he wrote a significant portion of the new BAD WOLVES album, apparently referencing the band’s upcoming third LP.

In recent months, Vext — who is black — has been vocal about his support for President Donald Trump while insisting he had never experienced racism in America and that it was all “manufactured.” In June 2020, Vext posted a six-plus-minute video on Instagram in which he suggested, without evidence, that “Black Lives Matter” was created by people like George Soros, the Holocaust survivor and billionaire who is the subject of many right-wing conspiracy theories, along with the Clinton Foundation. He also offered up the debunked theory that they invest in “Black Lives Matter” to profit from media coverage. The singer said he made the video “after weeks of research & interviews with independent journalist(s), military personnel, entertainment industry professionals, a virologist & many ex Democrats.”

BAD WOLVES guitarist Doc Coyle later took to his social media to “apologize to anyone who was hurt” by Tommy‘s comments and to offer up his perspective on what he called a “distraction” from BAD WOLVES‘ message of “inclusion and positivity.”

More recently, Vext was accused of assault by a former girlfriend. He denied these allegations, and it was later revealed that his ex-girlfriend was granted a two-year domestic violence restraining order against him.

In a brand new interview with Rock History Music, bassist Mike Levine of Canadian rock legends TRIUMPH was asked about the possibility of the band reuniting to play some select shows. He responded (as transcribed by BLABBERMOUTH.NET): "Well, we did a couple of times — in the 2000s. In 2008, we played over in Sweden — we did a festival there — and a show in Oklahoma, I think called Rocklahoma. And we were gonna go on […]