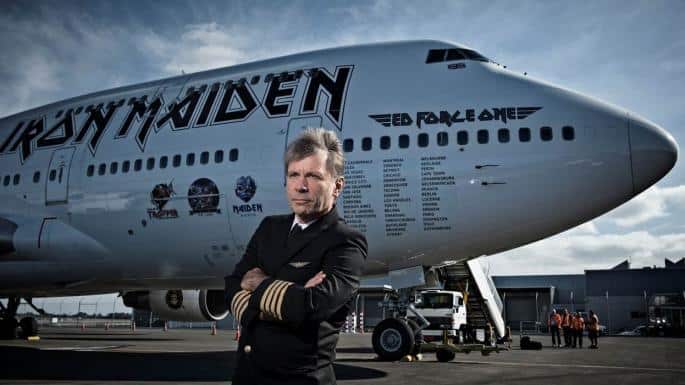 IRON MAIDEN singer Bruce Dickinson, who flew his group around the world in their customized jumbo jet dubbed Ed Force One, named after MAIDEN‘s iconic mascot Eddie, has told the Associated Press that he will not be sitting in the pilot’s seat when he and his bandmates return to the road later this year. “Oh, no, no, no, no,” he said. “We’re going to be flying and I’m going to be in the back. Hey, look, I’m 63 — I’m 64 in August. You know, when you get to 65, if you’re an airline pilot, they just take you out the back and shoot, right? So, I’m going to be sitting in the back being the backseat driver.”

According to the Federal Aviation Administration (FAA) and the International Civil Aviation Organization (ICAO), commercial pilots have to retire at age 65. There is currently no maximum age limit for being a private pilot or for being an Air Force pilot.

Dickinson gained a commercial pilot’s license after learning to fly in the 1990s. In 2012 he set up Cardiff Aviation, an aircraft maintenance company which has since changed its name to Caerdav.

Bruce, who spent a few years flying planes for Astraeus Airlines, told CNN in a 2007 interview: “Aviation’s been kicking around my family for as long as I can remember; my uncle was in the RAF. But I always thought I was too stupid. I was useless at maths and majored in history at university, so I thought history majors don’t become pilots, let alone rock stars. And then our drummer learned to fly, so I said, ‘If a drummer can learn to fly, then anyone can.'”

Dickinson told Wales Online that he still gets a thrill out of flying, but that it’s a totally different sensation to playing live.

“The satisfaction flying airplanes is getting the job done, but the satisfaction with playing live is external, looking out at all the people looking at you,” he said. “With an airliner, it’s all internal. If you’ve got passengers, nobody goes, ‘Wow! Wasn’t that great?’ They’re thinking about the rest of their day. Your job as an airline pilot is to deliver them safely and be invisible. That’s quite nice for me because it’s completely the opposite to what I do when I sing.”

Bruce will hit the road with IRON MAIDEN for a new North American leg of the band’s “Legacy Of The Beast” tour in September. 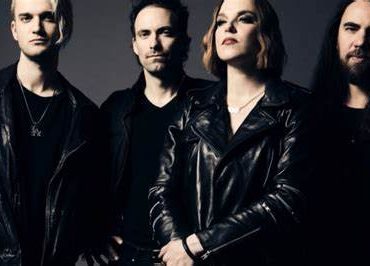 HALESTORM's previously announced European "An Evening With Halestorm" European tour has been canceled. The trek was scheduled to kick off on February 1 in Frankfurt, Germany and run through March 13 in London, United Kingdom. Earlier today, HALESTORM released the following statement: "To all of our European Freaks, we're sorry to inform you that due to the different restrictions in all of the countries we were planning on traveling to, it is logistically impossible […]