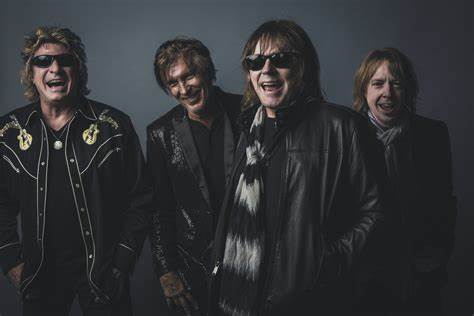 Bassist Jeff Pilson has revealed the classic lineup of DOKKEN is planning a retrospective boxed set.

Pilson, speaking this past spring on the “White Line Fever” podcast, repeated his previously stated ambition for singer Don Dokken, guitarist George Lynch, drummer Mick Brown and himself to release one more record of completely new material together and also spoke about solidifying the band’s legacy by having more of its music licensed in the media.

“We’re talking about possibly doing a box set at some point and throwing in a lot of interesting bonus stuff,” Pilson told Australian journalist Steve Mascord.

“I mean, I would love to do one more DOKKEN record. Right now Don is involved in his own version of the band and doing a record so we can’t really deal with a reunion record at this point. Maybe never. Who knows? But once he’s done with that and we address this again, I’d love to do another record. I’d love our legacy to … I just feel like we still have something to say musically. We got together for the reunion a few years ago and we did one new song and our chemistry was as intact as ever. It really felt unchanged. So my sense is it’s there and if we tapped into it, we could come up with a great record.

“So that’s one thing I’d like to do for our legacy. The other thing is .. I feel like DOKKEN music was under-utilized in just the social panorama of music out there so maybe somebody can do something like that.”

Pilson joked the City of Las Vegas could use 1984 single “Just Got Lucky” as its theme song.

“We do have plans for the DOKKEN legacy,” he said. “I hope it’s concluded with a record but again, it’s so hard to say right now and it’s hard to predict what’s going to happen. But know that we are thinking about it and moving in that direction.”

Asked about Don Dokken‘s recent complications from back surgery which limited his use of his hands, and whether this might affect any reunion, Pilson said: “Only in to what degree his endurance is. I don’t think he’s done a lot of live performing since that. He’s done some so I guess he can do it.

“We haven’t talked those sorts of specifics because we haven’t really talked a reunion. I mean, we’ve talked a little bit about it. I guess it’s a factor. He’s certainly able to write lyrics and melodies so we can certainly work together. I don’t think we’re limited.

“He was a writer of music as well with DOKKEN but not as much as George — or George and I working together were. So we would have no lack of music. As long as he could write lyrics and melody, we’d be fine.”

Pilson was also asked about new material by what is now his main band, FOREIGNER.

“We are working on some new songs, some great new material, but there’s absolutely no deadline or schedule or plan for how it’s going to come out,” he said.

“I think it’s safe to say that we’re probably not going to do a whole record of all new material. I don’t see that on the horizon but I see new material being added in new packages and other things that we’re releasing. All I know is we’ve been working on music and there’s some really good stuff out there.”

METALLICA has teamed up with Amazon to create "The Metallica Podcast". According to the band, the podcast will launch with eight episodes taking a look behind the scenes at METALLICA's self-titled 1991 LP, better known as "The Black Album." An exact release date for the podcast has not yet been announced. The Black Album is one of the most commercially successful and critically acclaimed records of all time. Its 1991 release not only gave METALLICA its first […]