FIVE FINGER DEATH PUNCH has entered the Hideout Recording Studio in Las Vegas, Nevada to begin recording its new album for a 2022 release. Helming the effort once again is Kevin Churko, the Canadian record producer/engineer and songwriter who has previously worked with OZZY OSBOURNE, DISTURBED, IN THIS MOMENT and HELLYEAH, among others.

On Friday (July 9), FIVE FINGER DEATH PUNCH bassist Chris Kael took to his Instagram to share a photo of him at Hideout, and he included the following message: “One of the hardest working bands in the business working hard on album Number 9. Are y’all ready? #ShitYesSon #PositivelyAffectingEardrums @thehideoutlv @kevin.churko @5fdp”.

As previously reported, FIVE FINGER DEATH PUNCH is also planning to re-record its debut album, 2007’s “The Way Of The Fist”, later this summer for its 15th anniversary. FIVE FINGER DEATH PUNCH guitarist Zoltan Bathory explained the decision to rework the LP in a social media post in May. He wrote: “It was a truly self produced DIY album, mostly recorded in my living room, so we thought it would be really interesting to hear it with a proper big production”.

FIVE FINGER DEATH PUNCH‘s upcoming album will be the band’s first with its latest addition, renowned British virtuoso Andy James, who replaced Jason Hook last year. James was previously featured on “Broken World”, a song that was included on the second installment of FIVE FINGER DEATH PUNCH‘s greatest-hits collection, “A Decade Of Destruction – Volume 2”, which came out last fall.

The band has had two dozen songs hit the Top 10 on the Mainstream Rock or Hard Rock Digital charts, starting with “The Bleeding”, which originally appeared on “The Way Of The Fist”. FIVE FINGER DEATH PUNCH‘s 2010 cover of BAD COMPANY‘s “Bad Company” was certified platinum for accumulating a million certified units. 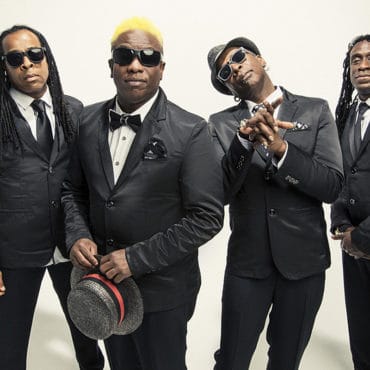 In a brand new interview with "Lipps Service With Scott Lipps", LIVING COLOUR guitarist Vernon Reid was asked if the band has commenced the songwriting process for the follow-up to 2017's "Shade" album. He responded: "Corey [Glover, LIVING COLOUR singer] and I started working on a song. We'll see where that goes." As for what possible lyrical themes the new LIVING COLOUR songs will cover, Vernon said: "We're processing what exactly this period… 'Cause a lot of folks, their immediate reaction, a lot of […]