FIVE FINGER DEATH PUNCH Shares Another Snippet Of New Music: ‘The Monster Is Waking Up’

Earlier today, the Las Vegas-based metallers posted the 12-second clip on social media and captioned it: “The monster is waking up – 2022”.

FIVE FINGER DEATH PUNCH previously shared snippets of music from the LP earlier this month and as well as in November.

FIVE FINGER DEATH PUNCH‘s follow-up to 2020’s “F8” is once again being recorded at the Hideout Recording Studio, the Las Vegas, Nevada facility owned and operated by Kevin Churko, the Canadian record producer/engineer and songwriter who has worked on all of FIVE FINGER‘s albums beginning with the band’s sophomore release, 2009’s “War Is The Answer”.

FIVE FINGER DEATH PUNCH‘s upcoming album will be the group’s first with its latest addition, renowned British virtuoso Andy James, who replaced Jason Hook in 2020. James was previously featured on “Broken World”, a song that was included on the second installment of FIVE FINGER DEATH PUNCH‘s greatest-hits collection, “A Decade Of Destruction – Volume 2”, which came out in the fall of 2020.

FIVE FINGER DEATH PUNCH has amassed over 7.6 billion streams and three billion video views to date and has sold over one million tickets between 2018 and 2020 alone. They are the second biggest artist in the hard rock space measured by total consumption (sales and streams), surpassed only by METALLICA. Recently signed to Better Noise Music, they’ve garnered 25 top 10 hit singles and 12 No. 1 singles.

Having become one of the most recognizable names in music, FIVE FINGER DEATH PUNCH frequently plays all major festivals and sells out arenas around the world.

Since FIVE FINGER DEATH PUNCH‘s debut album, “The Way Of The Fist”, came out in 2007, the band has released six consecutive albums that were certified gold or platinum by the Recording Industry Association of America (RIAA) as well as two chart-topping greatest-hits albums. In addition, FIVE FINGER DEATH PUNCH has earned numerous national and international awards and honors over the last decade, such as the prestigious Soldier Appreciation Award by the Association Of The United States Army, an honor bestowed upon only one other recording artist before them: Elvis Presley.

“F8” debuted at No. 1 on rock charts around the world with Top 10 Mainstream chart debuts in the USA, Austria, Australia, Canada, Finland, Germany, Sweden, Switzerland, the U.K. and more. “F8” features No. 1 hit singles “Inside Out”, “A Little Bit Off”, “Living The Dream” and “Darkness Settles In”. 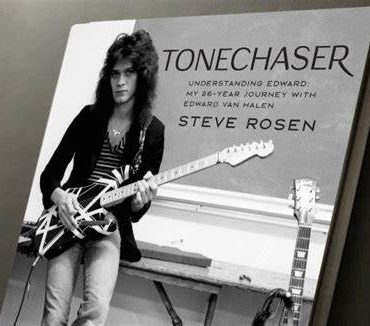 Longtime and esteemed rock journalist Steve Rosen has finally completed writing the long-anticipated book about his unique friendship with Edward Van Halen. The book is titled "Tonechaser - Understanding Edward: My 26-Year Journey With Edward Van Halen" and chronicles the writer's relationship with the late, great iconic guitar player beginning in 1977 and going through 2003. "Tonechaser" is described in a press release as "an honest and up-close look at what it was like to be […]