HEART‘s Ann Wilson has released a music video for her cover version of the ALICE IN CHAINS classic “Rooster”. You can now watch it below.

Wilson performed her version of “Rooster” when ALICE IN CHAINS was presented with the Museum Of Pop Culture (MoPOP) Founders Award in December 2020. “Rooster” is also the B-side on Ann‘s limited-edition 45rpm single, available for purchase at AnnWilson.com.

In a December 2020 interview with the Seattle Times, Ann stated about her version of “Rooster”: “I wanted to remain true to the song as much as possible, but I wanted to make it my own. But really, honoring the original spirit of the song, which is cockroaches and flies and all this kind of stuff. [Laughs]. Before I knew what form the MoPOP thing was gonna take with the live performances, I made a video for ‘Rooster’ that was really dark. They decided not to use it because they wanted it to be a bunch of live performances. But sometime I’ll put that video out because it’s really cool. It’s just maggots and war stuff and darkness and insanity.”

When asked by Rock Cellar how she came to choose “Rooster” for her performance at the Museum Of Pop Culture event, Ann said: “Talking with [ALICE IN CHAINS guitarist] Jerry [Cantrell], who’s a friend, about which song I should do, I said, ‘How would you feel if I did ‘Rooster’?’ Because I’d sung with them on the record of ‘Rooster’ years ago. And he thought that was a really good idea, so that’s what we did.”

Back in 2006, ALICE IN CHAINS drummer Sean Kinney told The Aquarian Weekly about HEART: “Ann and Nancy are the most talented musicians and beautiful women I’ve ever met. They’re just so cool and genuine and not weird diva-ed out shitheads. The talent they have is overwhelming, and the music they’ve made over the years is flawless.

Cantrell concurred, saying: “I’m from Seattle, man. We didn’t have too many heroes coming out of our town. We had [Jimi] Hendrix and HEART, QUEENSRŸCHE and that was pretty much it. We didn’t have a lot of nationally respected acts, and those were the people we had and they were real fucking quality bands. Quality music and quality people as well. I’ve known the girls for many years now. Seattle’s not that big a town, so everybody pretty much knows everybody and we’ve spent many years hanging.”

Kinney added: “They’re really good friends, and we’re from the same town. I grew up holding their foldout albums in one hand, holed up in my room at night… Nah I’m just kidding. They just became really good friends and they’re such talented women with such amazing tunes. My sister turned me on to them when I was just a little kid, and I’ve been a fan ever since then. It’s been really weird to be able to become friends with them and have opportunities to play with them… They’ve got to be the best female rock stars of all time in my book.”

“The most powerful voice I’ve ever heard is Ann Wilson,” Cantrell said. “Hands down. And the guitar work and the singing that Nancy does is incredible too. It’s an amazing thing. They’re legends in my mind.

“It’s not like when Cher shows up and does ‘do you beLIEEEVE’ with a vocoder,” laughed Kinney. “Ann‘ll just blow your brains out when she sings. I’ve been lucky enough to play with her and other singers are powerful, but if they don’t change the mix in your monitor, she gets up and it knocks you off your drum throne. It’s like, ‘Wow, that’s the shit right there.'” 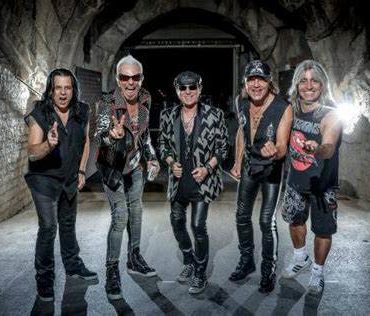 SCORPIONS have shared their new single, "Rock Believer". The song's music video will follow on January 18. The single's cover art was designed by Klaus Voormann and can be found below. "Rock Believer" is the title track of SCORPIONS' 19th studio album, which will be released on February 25. Two months ago, SCORPIONS released the official music video for "Rock Believer"'s first single, "Peacemaker". The track features music courtesy of guitarist Rudolf Schenker and bassist Pawel Maciwoda and lyrics by singer Klaus Meine. Asked in […]