MOTIONLESS IN WHITE To Release New Song ‘Cyberhex’ This Friday 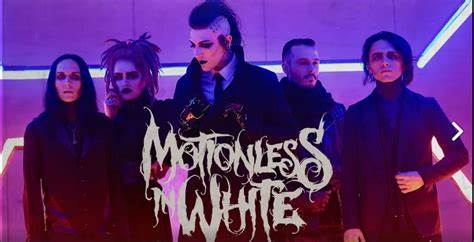 Last September, Cerulli told the Topeka radio station V100 that he was getting ready to record the vocals for MOTIONLESS IN WHITE‘s follow-up to 2019’s “Disguise” album. He said: “I was in California working with our producer Drew [Fulk] throughout a lot of the summer.”

As for a possible release date for the new MOTIONLESS IN WHITE LP, Chris said: “In my ideal scenario, I would love, like, February [or] March. But once it hits the label’s hands, that stuff changes. But I will be pushing for February or March, for sure.”

MOTIONLESS IN WHITE will join forces with BLACK VEIL BRIDES and ICE NINE KILLS for a triple co-headline North American tour this spring. The “Trinity Of Terror” tour will be the first time ever that fans get to see all three bands on the same stage each night.

The coast-to-coast outing, which will see the three bands alternating closing sets each night, is set to kick off on March 17 in Mesa, Arizona and make stops in Los Angeles, Chicago, Salt Lake City, Philadelphia, and more, before wrapping up with a performance at Norfolk’s Chartway Arena on April 27.

“Disguise” made an explosive chart debut upon its release, debuting at No. 4 on Billboard‘s Top Album Sales chart while also claiming No. 2 on the Hard Rock Albums chart and No. 27 on the Billboard 200 — MOTIONLESS IN WHITE‘s third consecutive Top 30 entry on the overall chart. “Disguise” was highlighted by a series of stellar singles, including “Brand New Numb”, “Undead Ahead 2: The Tale Of The Midnight Ride” and “Disguise”, the latter joined by a haunting companion video directed by frequent collaborators Jeremy Danger and Travis Shinn. In addition, “Brand New Numb” was accompanied by an official visual, directed by Max Moore.

In 2006, MOTIONLESS IN WHITE materialized out of Scranton, Pennsylvania with an inimitable conjuration of sharp metallic rock, nocturnal industrial, magnetic melodies, and larger-than-life visual imagery. The quintet — Chris Motionless (vocals), Ricky Olson (guitar), Ryan Sitkowski (guitar), Vinny Mauro (drums) and Justin Morrow (bass) — quietly clawed their way to the forefront of hard rock, gathering nearly half a billion cumulative streams and views to date. Following the success of “Creatures” (2010) and “Infamous” (2012), “Reincarnate” (2014) sunk its teeth into the Top 10 of the Billboard 200, bowing at No. 9 and capturing No. 1 on the Top Rock Albums chart. Both “Graveyard Shift” (2017) and “Disguise” cracked the Top 5 of the Top Hard Rock Albums chart and Top Rock Albums chart. The latter yielded the band’s biggest hit to date, “Another Life”, which gathered 37 million Spotify streams, followed by “Brand New Numb” at 24 million and “Disguise” at 17 million. Along the way, they sold out headline tours and supported everyone from SLIPKNOT and KORN to BREAKING BENJAMIN. Not to mention, MOTIONLESS IN WHITE have collaborated with Jonathan Davis of KORN, Maria Brink of IN THIS MOMENT, Dani Filth of CRADLE OF FILTH, Tim Sköld of KMFDM, Caleb Shomo of BEARTOOTH, and more. The five-piece kept busy throughout 2020, releasing the “Another Life / Eternally Yours: Motion Picture Collection” EP and a livestream performance of “Creatures” for its decade anniversary. They band also dropped a cover of THE KILLERS‘ “Somebody Told Me” and the standalone singles “Creatures X: To The Grave” and “Timebomb”. 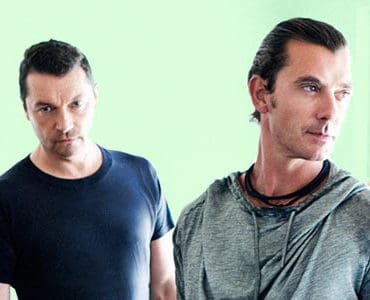 BUSH frontman Gavin Rossdale has confirmed to Australia's May The Rock Be With You that he has used some of the coronavirus downtime to work on new music. "I've just written 18 songs," he said (as transcribed by BLABBERMOUTH.NET). "And we start [in the studio] on Monday with a producer. [We'll] rearrange — hopefully not too much — the stuff I've done. We choose the songs we're gonna do. We either might use what I started, […]