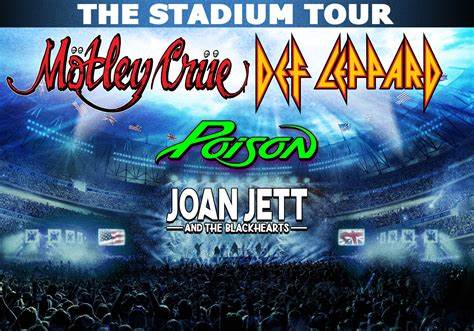 Tickets for the new dates go on sale to the general public on Friday, February 25 at 10 a.m. local time via Live Nation.

“On behalf of the band, we’re beyond thrilled that the stadium tour is finally happening this summer,” DEF LEPPARD‘s Joe Elliott said in a statement. “It’s been a while coming and we can’t wait to get back on stage again and we can’t wait to see you in one of the many stadiums soon!”

MÖTLEY CRÜE added: “It’s on! We don’t think we’ve ever looked forward more to kicking off a tour than this one. We can’t wait to finally see all the fans across North America again. Get ready for a wild ride this summer!”

POISON‘s Bret Michaels said: “There are not enough words to thank the three generations of fans for making this such an exciting, record-breaking, historical tour with the fastest sellouts in history at these stadiums.”

JOAN JETT & THE BLACKHEARTS stated: “We are so excited to be back out on the road! We missed doing what we love most and can’t wait to see the fans out there again!”

“The Stadium Tour”, which was originally planned for 2020 and later moved to 2021, will now kick off on June 16 in Atlanta, Georgia.

Emerging rock band CLASSLESS ACT, signed to Better Noise Music, is set to open the tour. MÖTLEY CRÜE‘s Tommy Lee was an early follower of the band and is excited to have them join him and his bandmates on the road, saying: “I remember when we went out with Ozzy [Osbourne] in 1984 and how it was an insane game changer!! We literally blew up after having that opportunity to play live in front of 20,000 people every fucking night! Since then, we’ve always felt it was important to help new bands; whether it was GUNS N’ ROSES, SKID ROW or so many others. This summer we’re gonna help out CLASSLESS ACT.”

Last October, bassist Nikki Sixx told Germany’s Radio Bob! that he and his CRÜE bandmates will “start rehearsals in May” for “The Stadium Tour”. “I start training in December,” he said. “Now it’s down to hard work, getting ready, getting the band into rehearsal.

“We rehearse really hard because we will take a song like ‘Dr. Feelgood’ and while we’re building the show — let’s just say the show is… all the lights are moving, they’re green and they’re slowly moving — we’ll build a whole intro in and design the lights and the lasers around that,” he explained. “So it’s a long process and tedious. So we go to rehearsal and we might need to build in those 32 bars. And then we’ve gotta work with the lighting and the laser company. And then we’ve gotta make sure everything is organized so we get our count-ins for where we need to be onstage. So there’s so much going on.”

When it happens, “The Stadium Tour” will mark the CRÜE‘s first live dates since wrapping its 2014/2015 farewell tour. CRÜE toured with POISON back in 2011 and DEF LEPPARD teamed up with POISON for a string of road dates in 2017, but the upcoming jaunt marks the first time all four acts have hit the road together for an extended tour.

As of January 30, 2020, “The Stadium Tour” had already grossed $130 million from one million tickets sold, plus another $5 million worth of VIP seats, according to Billboard.

Tickets ranged from $150 to $400, not counting some varied pricing that reflected demand as part of “dynamic pricing.”

CRÜE fans who shelled out for the band’s 2014/2015 “farewell” tour were led to believe that the group would never return after playing its final show on December 2015 at the Staples Center in Los Angeles. The band touted the signing of a pre-tour “cessation of touring” agreement as cementing the fact it truly was the end of CRÜE‘s life on the road.

On November 18, 2019 — three years and 11 months after the band played its last show — CRÜE posted a video with Machine Gun Kelly, who portrayed Tommy Lee in the band’s biopic “The Dirt”, explaining that due to the band “becoming more popular than ever” and “gaining an entirely new legion of fans” in the four years they’d been off the road, the band felt the need to blow up their previous contract in order to come out of retirement.

At a press conference in Hollywood announcing the CRÜE‘s stadium tour, Sixx explained the band’s decision to return, saying: “Honestly, I don’t think any of us thought, when we were on ‘The Final Tour’, we would ever get back together. We weren’t really getting along at that point. We had been together 35 years, and it had been a lot of years on the road. I don’t think we took a lot of time for ourselves off; we were just constantly touring for all that time. And when it came to the end, we broke the band up and everybody went their own ways.”

Sixx continued: “It was during the making of ‘The Dirt’ movie, we started working on the script, started being on the set, we started hanging out again together. And I think we really started to realize — without even talking about the music — how much we missed each other. And then that got us to go in the recording studio, which is where the whole thing always starts for all of us.”

“The Dirt”, a film adaptation of the CRÜE‘s 2001 memoir, featured four new songs recorded by the band expressly for the soundtrack. 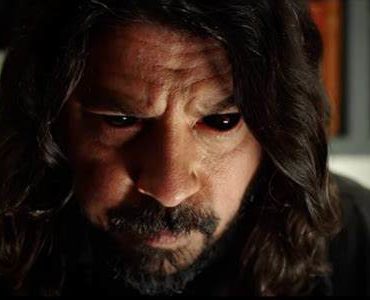 Dave Grohl has told Rolling Stone that he recently recorded an entire metal album as the fictional band DREAM WIDOW in the FOO FIGHTERS' horror-comedy film "Studio 666". In "Studio 666", FOO FIGHTERS move into an Encino mansion steeped in grisly rock and roll history to record their much-anticipated tenth album. Once in the house, Grohl finds himself grappling with supernatural forces related to related to the studio's former residents — the aforementioned fictional act DREAM WINDOW — that threaten both the completion of […]