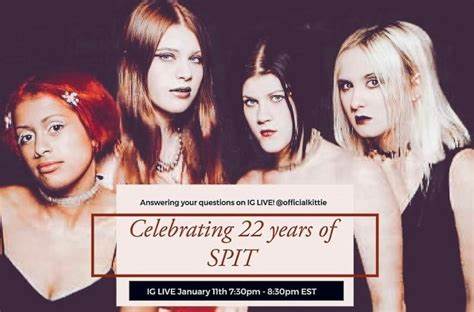 Earlier today, KITTIE posted the following message on its Instagram account: “Join us tomorrow on IG Live at 7:30pm EST for a little celebration of the 22nd anniversary of our debut album SPIT. We’ll hang out and answer some questions! #iglive #spit #happybirthday #joinus #kittie”.

Candler left KITTIE after the release of “Spit” in order to finish high school and was replaced by Talena Atfield.

Bowman exited KITTIE in 2001 and started her own industrial/electronic project, AMPHIBIOUS ASSAULT.

In a 2002 interview with Ballbuster Music, Mercedes stated about KITTIE‘s debut album, “I think ‘Spit’ is probably the least polished record I’ve ever heard in my entire life. It was recorded in nine days on Fender Squires. It was a point in our lifetime, and it was like a snapshot of what we were like back in 1999.”

She added, “We’d been a band for so long, we played over 200 some odd shows before we got record label interest. We were playing every weekend that we could. Sometimes we were playing during the week. We traveled to Toronto, to Detroit; we played a lot of shows. A lot of bands that play 12 shows before they get signed, they sound like crap on their record; they’re experimenting on their recording, and they don’t know what they want to do. We were just lucky because we knew what we wanted to do.”

After the London, Ontario, Canada-based metallers completed the touring cycle for 2011’s “I’ve Failed You” album, KITTIE entered a long period of inactivity during which Morgan focused on a marketing job for a chain of fitness clubs while Mercedes worked in real estate and more recently at a software company. The group also began work on a career-spanning documentary, “Origins/Evolutions”, which finally saw the light of day in 2018 via Lightyear Entertainment in North America.

Last May, Morgan told Pierre Gutiérrez of Rock Talks that KITTIE was still “on hiatus.” She explained: “Since the documentary was filmed and has been released, there’s been some changes. We are no longer a signed act. So if we were going to make new music, it would be released independently. But we do still have a number of legacy-type projects that we are going to be releasing and working on for the future. We love to be able to pay tribute to the things that we’ve done in the past. And I know that a lot of people are even just excited for re-releases of old stuff and whatnot. We’re always looking for ways to reintroduce people [to KITTIE‘s music] and whatnot. So we do have a couple of things coming down the pipeline. I can’t really give too many details yet, but there will be announcements and it will be awesome and it should be pretty fun. But no new music as of right now.”

“I’ve Failed You” sold 3,000 copies in the United States in its first week of release to debut at position No. 178 on The Billboard 200 chart. 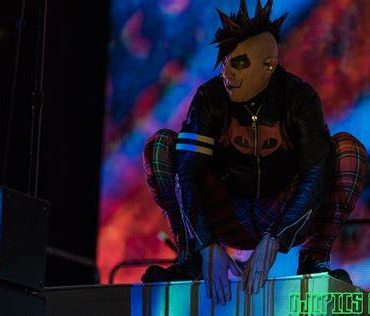 TOOL kicked off its 2022 tour in support of the "Fear Inoculum" album Monday night (January 10) at the Matthew Knight Arena in Eugene, Oregon. It marked the band's first live appearance since March 2020 when TOOL's trek was cut short following a gig in Portland, Oregon due to the burgeoning pandemic. The setlist for last night's concert was as follows: 01. Fear Inoculum 02. Opiate (extended version) 03. The Pot 04. Pushit (first time since 2014; album version) […]