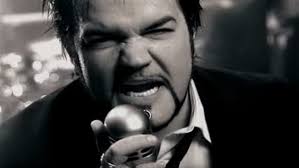 The eldest son of original SALIVA singer Josey Scott, died on Sunday, May 23 after a battle with COVID-19, the disease caused by the SARS-CoV-2 coronavirus.

Josey, who left SALIVA at the end of 2011 after 15 years with the band, reportedly to pursue a solo Christian music career, announced his son’s passing in a social media post. He wrote: “I don’t even know where to begin in making this post. Our sweet Cody lost his fight with covid tonight, and the Lord has called him home. We are absolutely heartbroken, confused, grief stricken, angry, just every emotion you can imagine. Please keep us in your prayers, as we have some difficult days ahead. We are trusting Jesus to bring us peace that passes all understanding.”

Josey first revealed his son’s health battle on May 11. At the time, he shared a photo of Cody and wrote in an accompanying message: “Please, everyone, I beg you to please pray for my son Cody. He is in the hospital in Memphis with Covid pneumonia. He is 29 years old. He is my life, and I believe G-d can heal him, I just need everyone within the sound of my voice, and the viewing of this message, to please, please pray for my beautiful baby boy! He has always been so loving, and kind, and he is an amazing human being, and we look forward to years, and year more of the joy, and pleasure of his amazing presence, and company! Please remember my son in your prayers! #prayers #prayer #prayersforcody #covid_19 #healing #love #care #medicalstaff #essentialworkers”.

Formed in Memphis in 1996, SALIVA released a self-titled a debut album the following year. After selling 10,000 copies of the self-released album, Island Records took notice of the band. “Every Six Seconds” and its hit singles, the Grammy-nominated “Your Disease” and “Click Click Boom”, catapulted SALIVA into the mainstream and is now certified double platinum.

Two months ago, it was announced that SALIVA had abandoned its previously announced plan to reunite with Scott.

SALIVA guitarist Wayne Swinny addressed Scott‘s status with the band during a March 2021 interview with Meltdown of Detroit’s WRIF radio station. Asked if there are still plans for Josey to reunite with SALIVA for a possible album and/or a tour, Wayne said: “There was preliminary discussions, but it never really got off the ground. We just basically had to make plans and keep this train rolling, so to speak. It didn’t make sense to me to stop what we were doing. ‘Cause this unit, we’ve been together, it’s been almost 10 years now, with Bobby in the band. Brad came along shortly after that. We’re tight. We get along. It’s a well-oiled machine. We’ve got a great crew, a great bus driver. It would throw a monkey wrench into the actual SALIVA.”

Legendary vocalist and Rock And Roll Hall Of Fame inductee Ann Wilson has unveiled a collection of unreleased archival songs made with the band that she was in before HEART. THE DAYBREAKS were a short-lived hard rock group fronted by Wilson in the late 1960s. They performed in various small venues, recorded a handful of songs and released a seven-inch single in 1969 before she left the band to form HEART with sister Nancy. THE DAYBREAKS EP is out now at all streaming platforms. […]