ROB HALFORD Says GLENN TIPTON Will Play On Next JUDAS PRIEST Album: ‘Whatever Work He Does, He’s Valuable’ 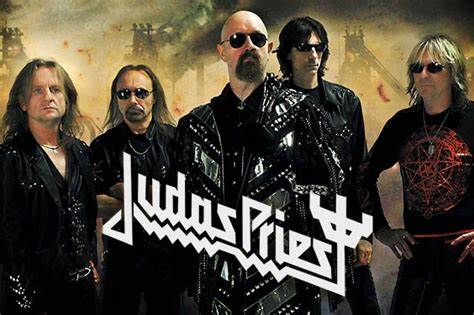 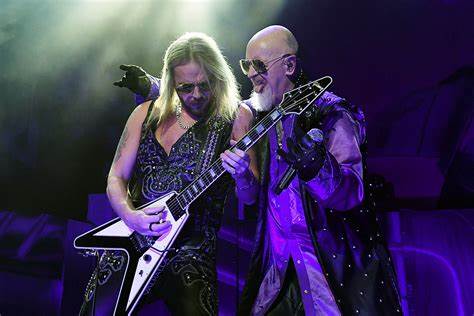 JUDAS PRIEST singer Rob Halford spoke to Spain’s Mariskal Rock about the progress of the songwriting sessions for the band’s follow-up to 2018’s “Firepower” album. “Slowly but surely, these things come together; it’s what we’ve always done,” he said (as transcribed by BLABBERMOUTH.NET). “And generally, when we go out on these world tours, we generally tour to support a new record. We did something a little bit different this time because it was the 50th-anniversary year of celebration, which is gonna push into next year now.

“It’s sounding good, man. It’s sounding really strong,” he continued. “I’m very excited for our fans again. I think it’s gonna be another great display of the passion that we still have as writers and as players to get this down and to unleash some new metal.

“We’ve got a bunch of stuff. I don’t know when you and I talked last, but since then, we did have that one big writing session — March, whatever year that was; not this year, but last year I think it was. And then another one before the Bloodstock festival [in August]. So we’ve got a strong, strong bunch of id[eas]… Well, they’re more than ideas — they’re completed songs. We haven’t gone into full production yet.

Halford also offered a health update on PRIEST guitarist Glenn Tipton who was diagnosed with Parkinson’s disease seven years ago after being stricken by the condition at least half a decade earlier. Tipton announced in early 2018 he was going to sit out touring activities in support of “Firepower”. He was replaced by “Firepower” producer Andy Sneap, who is also known for his work in NWOBHM revivalists HELL and cult thrash outfit SABBAT.

Asked if Tipton will be involved in the recording sessions for PRIEST‘s next album, Rob said: “There’s ways of doing this. Glenn can still play the guitar. He plays it differently, but he can still play. He walked out with us on Bloodstock recently [and played] ‘Metal Gods’, ‘Breaking The Law’ and ‘Living After Midnight’, I think it was. He can play. So he’ll be on this next album. Whatever work he does, he’s valuable — really important. He’s a member of JUDAS PRIEST. He’s still there. He’s still an important component of this band and what this band represents, particularly in the writing sense. He made a massive contribution to the songs that we have so far. And we’ll still keep writing — we’ll still keep putting together the ideas. ‘Cause you can never not stop writing. The calendar tells you, the label says, ‘We would like a record blah blah,’ because it takes months to prepare and then months of promotion. And the clock is ticking.

“So, yeah, he’s good, man. He’s still a fighter. He never lets anything stop him. He’s a great force for people that are living their lives actively and productively with Parkinson’s. So he’s still very much [like] that ‘No Surrender’ song — a heavy metal hero.”

Bassist Ian Hill is the sole remaining original member of PRIEST, which formed in 1969. Halford joined the group in 1973 and Tipton signed on in 1974. Rob left PRIEST in the early 1990s to form his own band, then came back to PRIEST in 2003. Founding guitarist K.K. Downing parted ways with the band in 2011, and was replaced by Richie Faulkner.

Some of the other members of PRIEST have also dealt with various health setbacks in recent years. Halford recently publicly revealed that he battled prostate cancer during the pandemic. He previously mentioned his cancer battle in the new chapter added to the updated paperback edition of his autobiography, “Confess”. In “Confess”, Halford revealed that he was diagnosed with cancer after experiencing symptoms for at least a couple of years.

In July 2020, Rob underwent prostatectomy, an operation where the entire prostate gland is removed plus some of the tissue around it, including the seminal vesicles. After more cancer was found earlier this year, he went through radiation treatments in April and May and eventually got then all-clear in June. He also had an appendectomy after a tumor was discovered on his appendix.

Faulkner suffered an acute cardiac aortic dissection during the band’s performance at the Louder Than Life festival in late September. Faulkner was rushed to the UofL Health – Jewish Hospital where the cardiothoracic surgery team needed approximately 10 hours to complete a life-saving surgery.

An extended two-minute teaser video for W.A.S.P.'s upcoming 40th-anniversary tour, narrated by frontman Blackie Lawless, is available below. June 6, 2022 marks the 40th anniversary of one of the most infamous, notorious, controversial heavy metal bands in the world… W.A.S.P. So join W.A.S.P. for this very special 40th-anniversary world tour that kicks off in Milan, Italy on March 18, 2022. This first leg of dates will see the band hit Italy, Spain, Ireland, North Ireland, United […]