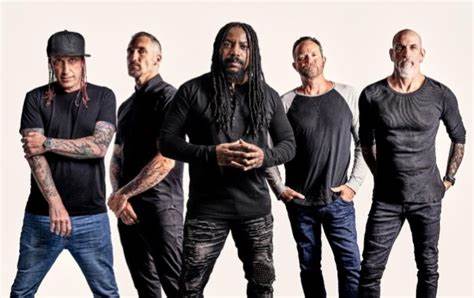 SEVENDUST will release a digital expanded edition of its latest album, “Blood & Stone”, on December 10. “Blood & Stone Deluxe” contains five new tracks, including three never-before-released remixes and two newly recorded songs. Jake Bowen of PERIPHERY, Richard Wicander of FIRE FROM THE GODS and Justin deBlieck, formerly of ICE NINE KILLS, provide remixes and the band finished recording “All I Really Know” and “What You Are” specifically for this release. “Blood & Stone Deluxe” is being released via all digital partners via Rise Records and was produced by Michael “Elvis” Baskette.

To coincide with the announcement of “Blood & Stone Deluxe”, SEVENDUST has released a visualizer for “What You’ve Become (Justin deBlieck Remix)”. The Justin deBlieck remix contains the emotion of the original while building upon thematical musical elements adding a massive string arrangement to it. The band will also release snippets of the other remixes: “Dying To Live (Jake Bowen Remix)” will be available on the evening of Wednesday, December 8 and “Kill Me (Richard Wicander Remix)” on the morning of December 9. The visualizer for “What You’ve Become (Justin deBlieck Remix)” can be seen below.

SEVENDUST singer Lajon Witherspoon told Audio Ink Radio about the recording process for “Blood & Stone”: “I feel like we’ve grown as not just artists but men, personally. I feel like we’re seasoned, if that makes sense. Maybe we’re just like an old wine. We’ve had time to really know each other. We’re brothers. It’s easy for us when we’re in the studio. It’s like a well-oiled machine, once we get back in there. That’s where the magic happens, is when we’re looking at each other. It always reminds me of when we first got together, whenever we get together, as long as we’ve been together. It’s just because there’s a certain light that comes on. It’s always been great to have that.” 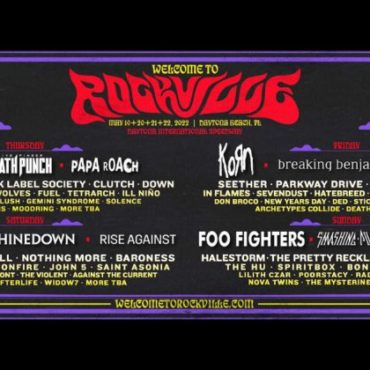 Danny Wimmer Presents has announced the lineup for the 2022 edition of the Welcome To Rockville festival. Returning to its new home at the iconic Daytona International Speedway in Daytona Beach, Florida over the weekend of May 19-22, 2022, the event includes previously announced headliners GUNS N' ROSES, FOO FIGHTERS, KISS and KORN. The music legends will be joined by an equally impressive who's who of rock and metal, including FIVE FINGER DEATH PUNCH, SHINEDOWN, SMASHING PUMPKINS, BREAKING BENJAMIN, MEGADETH, JANE'S ADDICTION, PAPA ROACH, RISE AGAINST, HALESTORM, IN […]