SIXX:A.M. Doesn’t Have Any Plans To Tour Or Record More New Music

Michael discussed “Hits” and SIXX:A.M.‘s future plans during a new interview with Metal On Loud. When the interviewer pointed out to James that greatest-hits albums are usually something that bands release at the end of their careers, he responded (as transcribed by BLABBERMOUTH.NET): “I think for us, we really don’t know what the future holds for SIXX:A.M. So for us, when we sat down and started doing these recordings [for ‘Hits’], it was pretty much, in our minds, ‘Okay, this is a good way to kind of wrap up SIXX:A.M.‘s body of work.’ So we were kind of looking at it as ‘This is the end, at least for now.’ And that was also an important aspect to us going into the studio and doing this because we really wanted to be able to — for lack of a better way to describe it — wrap this up and put a nice bow on it and really feel like we’ve controlled this from the beginning to the end. So it was fun and it was exciting. And as I said, we never know what SIXX:A.M. is gonna do in the future, but for now, we’re looking at this and saying, ‘This is a good way to wrap this up.'”

Asked if there are any plans for SIXX:A.M. to hit the road in support of “Hits”, James said: “We don’t have any tour plans. I know that, of course, MÖTLEY CRÜE has this big tour that has been planned and rescheduled. So I think that that’s probably all-encompassing for Nikki and the gang, as far as that goes. But we right now don’t have any plans to do that.

“When we got off the road a couple of years ago, we were all pretty burnt out. And I think that we just naturally kind of made the decision that that might be it for SIXX:A.M. as far as touring goes. But you never know what time off does to somebody. So we’ll see.”

Inspired by the release of Sixx‘s “The First 21: How I Became Nikki Sixx”, SIXX:A.M. members Michael, Ashba and Sixx are making “Hits” available as a companion piece to the book.

In 2007, SIXX:A.M. released “The Heroin Diaries Soundtrack”, which acted as a companion piece to Sixx‘s best-selling memoir “The Heroin Diaries: A Year In The Life Of A Shattered Rock Star”, released the same year, introducing the concept of a book soundtrack into popular culture. Both the book and the album were successes upon release, with the book instantly becoming a New York Times best seller in its first week, selling out in bookstores around the U.S. The album spawned the No. 1 single “Life Is Beautiful”, while simultaneously receiving critical acclaim and eventually achieving gold certification in the U.S. 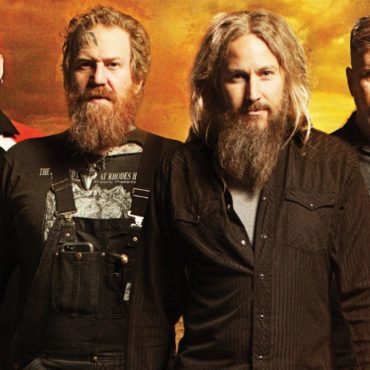 Atlanta progressive metallers MASTODON have released a new song called "Sickle And Peace". The track is taken from MASTODON's upcoming album, "Hushed And Grim", which is due on October 29. The follow-up to 2017's "Emperor Of Sand" was recorded at West End Sound, which is located inside of Ember City, the rehearsal facility that members of MASTODON manage in Atlanta. Helming the effort was Grammy-winning producer/mixer/engineer David Bottrill, who has previously worked with MUSE, DREAM THEATER and TOOL, among many others. The "Hushed And Grim" artwork was created by […]