(HED) P.E. Releases Music Video For ‘Across The Universe’ 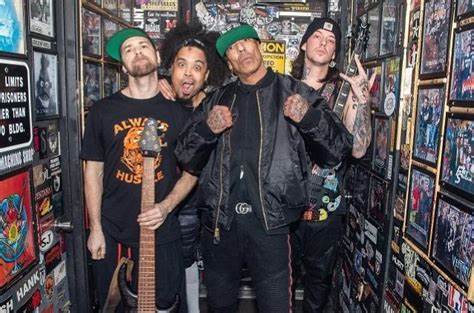 SoCal artists (HED) P.E. have released their new video for “Across the Universe” featuring Ipcus Pinecone from VILLEBILLIES and ELEPHANT ROOM. The song is the latest single from (HED) P.E.‘s new album “Califas Worldwide”, which dropped last month on Suburban Noize Records.

“This track was produced by one of Tech N9ne‘s producers and Demi was in a band the VILLEBILLIES that we toured with back in the day. Always enjoyed their music and was stoked to collaborate with them,” said (HED) P.E. frontman Jared Gomes. “I got a psychedelic feeling from this song and the other rappers on the track are fire. Shevy Chase, one of the rappers, also created the video and killed it.”

In order to bring those Cali vibes to life visually, (HED) P.E. enlisted Jim “Taz” Evans to create the cover art. Known as the “Rock Poster God,” Taz has illustrated and designed some of the most iconic rock posters for everyone from Neil Young, RAMONES, SMASHING PUMPKINS, THE PIXIES, and more. For “Califas Worldwide”, Evans came up with an iconic lowrider and street art that have been synonymous with the southern California landscape.

(HED) P.E. are the pioneers of the G-Punk sound, which fuses together punk-rock, metal, hip-hop and reggae. The band has toured the world for 20 years sharing the stage with the likes of SUICIDAL TENDENCIES, SYSTEM OF A DOWN, KORN, Tech N9ne, TOOL as well as the original BLACK SABBATH on the iconic Ozzfest tour. (HED) P.E. experienced a creative resurgence after signing with Suburban Noize Records in the early 2000s and was instrumental in developing the booming underground scene.

(HED) P.E. will join DROWNING POOL, ILL NIÑO and EVOLUTION EMPIRE on the “Brothers In Arms” tour kicking off on March 13 in San Antonio, Texas.

"Missionary Man", the new solo single from HEART singer Ann Wilson, can be streamed below. The track is taken from Ann's upcoming album, "Fierce Bliss", due on April 29 via Silver Lining Music. One of the premier hard rock vocalists of all-time, Wilson smashed boundaries with her band HEART, the eight-times platinum, 35-million-plus-selling Rock And Roll Hall Of Fame trailblazers who formed in 1973. During a decades-long career, Wilson rode the roller coaster of fame, fortune and madness, learning both joyous and hard, […]