ANTHRAX Is Working On New Music

ANTHRAX has apparently resumed work on material for the band’s next studio album.

Earlier today (Tuesday, March 22), the group’s social media was updated with a photo of guitarist Scott Ian, drummer Charlie Benante and bassist Frank Bello in what appears to be a recording studio, along with the caption: ” Forging new metal in an undisclosed location…. #anthrax”.

Ian discussed the progress of the songwriting sessions for ANTHRAX‘s follow-up to 2016’s “For All Kings” during a July 2021 appearance on Full Metal Jackie‘s nationally syndicated radio show. At the time, he said: “We’ve been at it for a little while now. We actually started writing in ’19 — pre-COVID — and kind of stepped away from things when COVID happened. We were all separate and apart and we would kind of revisit some of the demos, but we weren’t actively working on it. And that’s actually started up again over the last couple of months, as far as kind of reopening the books on the new material and thinking about it and working on it.

“Yeah, it’s the same as it’s always been,” he said. “I would have to think by the time we get to the other side of the writing process and we decide we’re ready to go record it, I would have to assume it’s certainly going to represent this time in our lives. And the world having gone through a pandemic, I would imagine certainly that’s in some way, shape or form going to come out through this next record. I can’t tell you how yet, but I would have to think it’s going to.”

ANTHRAX celebrated its 40th anniversary in 2021 with a number of special activities and events. Formed by Ian and bassist Dan Lilker in Queens, New York on July 18, 1981, ANTHRAX was one of the first thrash metal bands to emerge from the East Coast and quickly became regarded as a leader in the genre alongside METALLICA, SLAYER and MEGADETH. 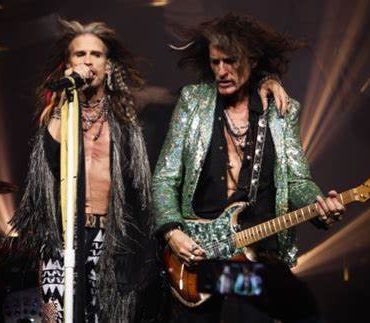 As part of the continued celebration around their 50th anniversary, four-time Grammy-winning and diamond-certified rock legends AEROSMITH have announced the return of their Las Vegas residency, "Aerosmith: Deuces Are Wild", at Dolby Live at Park MGM, beginning Friday, June 17, 2022. The incredible show will be the first live concert experience presented in Dolby Atmos at Dolby Live. Dolby Live is one of the world's most technologically advanced performance venues for enjoying live music […]