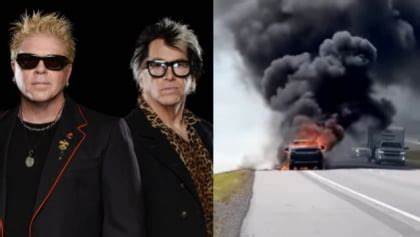 The members of THE OFFSPRING escaped unharmed after one of their vehicles caught fire Saturday while they were en route to Rimouski, Quebec, Canada for a concert.

The veteran punk rock act took to social media yesterday to share a short video of the burning vehicle, and included the following message: “While traveling through Canada yesterday, something flew off the vehicle in front of us and became wedged underneath one of our SUVs and it caught fire. Everyone got out safely, but the luggage, passports, laptops and pretty much everything else was destroyed.

“We are happy to report that everyone is doing ok and we’ve made it safely to Rimouski and will be performing tonight at Les Grandes Fetes TELUS. Hope to see everyone there!”

THE OFFSPRING guitarist Kevin “Noodles” Wasserman also shared a clip of the burning SUV and wrote: “No one was hurt. Everyone got out of the vehicle unscathed. Unfortunately about half our crew lost all their belongings in the fire, including luggage, computers, & passports. But it could’ve been much worse. The band & I are so thankful & relieved that all involved are OK.

“No one is sure what started the fire yet, but the SUV hit something big & heavy, possibly a lost trailer hitch, and within seconds the vehicle was in flames. You can see from the video that they didn’t even get off the Highway before everyone had to bail. No time to save any belongings. Scary shit!
“Our crew do all the heavy lifting so that we look & sound as good as possible when we take the stage. They’re travel & workdays are always longer & more arduous than ours, and we can’t thank them enough for all they do. To see them have to go through something like this is heartbreaking & frightening. I am so glad they are all OK!”

THE OFFSPRING reportedly played in front of 3,000 fans on Thursday (August 4) in Sherbrooke and was en route to Rimouski for the next show on its North American tour.

The band is currently on the road in support of its most recent album, “Let The Bad Times Roll”.

Frequently regarded as one of the best rock bands of all time, THE OFFSPRING have garnered a reputation for their unmistakable sound and social comment. The multi-platinum band first achieved worldwide success in the 1990s with the release of their album “Smash”, which sold over 11 million copies. Following “Smash”, they continued to release hit after hit, popularizing rock at a mainstream level.

Throughout THE OFFSPRING‘s career, they’ve sold over a staggering 40 million albums, and toured arenas, and built a global fan base. “Let The Bad Times Roll” marks the band’s tenth studio album and third album produced by the legendary Bob Rock. True to the irreverence at the core of their rock music, the band and lyricist Dexter Holland took a view to today’s cultural moments and didn’t shy away from creating topical material in this album.

“Let The Bad Times Roll” has been a huge global success, hitting career-high chart debuts with seven top 5 and ten top 10 international debuts and nine top ten debuts in the U.S. The album peaked at No. 3 on the U.K. chart and hit No. 1 on the Alternative Albums chart in the U.S.

Originally formed under the name MANIC SUBSIDAL, THE OFFSPRING‘s lineup consists of Holland, Wasserman and bassist Todd Morse. THE OFFSPRING is often credited — alongside fellow California bands GREEN DAY and RANCID — for reviving mainstream interest in rock in the 1990s. 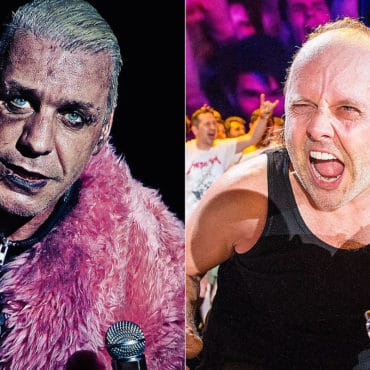 Watch Metallica’s ‘Master Of Puppets’ in the Style of Rammstein

Musician Denis Pauna is a master of metal and hard rock "what-ifs." Like, what if Song X by Band Y was played in the style of Band Z? They aren't mash-ups, but rather, in-the-style-ofs. Pauna has many Metallica "what-ifs" on his YouTube page. What if Type O Negative Wrote "The Unforgiven?" What if Alice in Chains Wrote "Seek and Destroy?" And his latest, What if Rammstein Wrote "Master of Puppets?" The song, played by […]