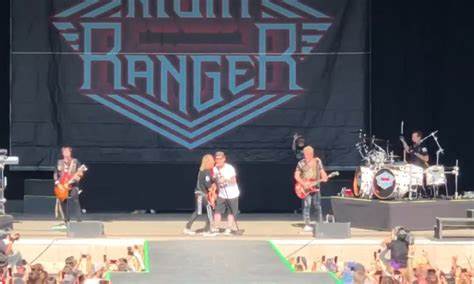 Corey Taylor joined NIGHT RANGER on stage during the band’s July 16 performance at Rock Fest in Cadott, Wisconsin to perform the veteran rockers’ 1982 single “Don’t Tell Me You Love Me”. Video footage of his appearance can be seen below.

NIGHT RANGER singer/bassist Jack Blades explained to Ultimate Classic Rock how the collaboration came about: “[Guitarist] Brad [Gillis] and I had met him a few years ago, with Eddie Trunk on ‘That Metal Show’. We were excited to share the stage with him at Rock Fest and I asked him if he wanted to sing the second verse of ‘Don’t Tell Me You Love Me’… and if he knew the words. He said, ‘Hell yeah,’ and out he came and killed it.” Blades went on to describe the SLIPKNOT and STONE SOUR frontman as “a brilliant songwriter and an amazing talent. We are happy to call him our friend.”

Last month, Taylor announced new “CMFTour” summer 2021 tour dates. The new headline run will kick off on August 6 at the House of Blues in Las Vegas, Nevada and will feature special guests CHERRY BOMBS, led by Taylor‘s wife Alicia Taylor, on all dates.

The new summer dates will see Taylor and his band running through anthems from his critically acclaimed solo debut “CMFT”, choice cuts from his SLIPKNOT and STONE SOUR catalogs, and various covers and surprises. Additionally, CHERRY BOMBS will kick off each night of the tour with a high-octane, high-flying performance.

2021 has been as busy as ever for Taylor. Having wrapped the sold-out spring leg of his “CMFTour”, which he documented in a series of “Tour Diaries” for Rolling Stone, Taylor also recently released an inspired new cover of CROSBY, STILLS, NASH & YOUNG‘s “Carry On” and fronted GROUND CONTROL, a supergroup also comprised of Taylor Hawkins (FOO FIGHTERS), Dave Navarro (JANE’S ADDICTION) and Chris Chaney (JANE’S ADDICTION) performing at “The Bowie Celebration: Just For One Day” in tribute to the late David Bowie.

NIGHT RANGER will release its 12th studio album, “ATBPO”, on August 6 via Frontiers Music Srl. “ATBPO” stands for “And The Band Played On”, an ode to making music during the COVID-19 era. It will be available on CD and vinyl (several limited-edition, color vinyl versions), as well as digitally across all streaming platforms.

NIGHT RANGER began writing the album in early 2020, amid the onset of the global pandemic. After narrowing down the song selection and tightening them up to their well-known rock and roll sound, the band hit the studio, although separately, due to the times we are in. Throughout “ATBPO”, we hear NIGHT RANGER continuing their hot streak that kicked off with 2011’s “Somewhere In California”. Ten years on, and two highly acclaimed albums later, “High Road” and “Don’t Let Up”, the band’s latest studio work shows them still burning with that high-octane hard rock energy they are known for. NIGHT RANGER has always had a knack for killer melodies, intricate instrumentation, and captivating lyrics; “ATBPO” delivers all of that and more.

Having sold over 17 million albums worldwide, performed across more than 4,000 stages, and enjoyed a radio audience that exceeds one billion, NIGHT RANGER has both epitomized and transcended the arena rock sound and style well beyond that era. 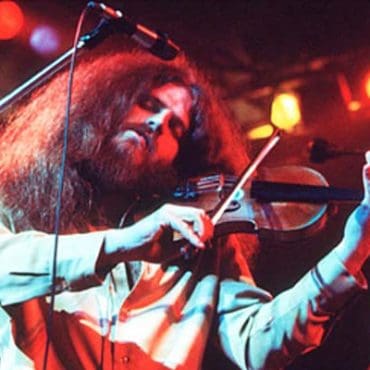 Robby Steinhardt, a founding member, violinist and vocalist for Kansas, has died at age 71 following a brief illness, according to a statement released by his family. "Robert Eugene Steinhardt was well recognized as a founding member and original violinist and vocalist for the rock band Kansas," reads the statement. "His violin and vocals on 'Dust in the Wind,' 'Point of No Return' and 'Carry on Wayward Son' have etched Robby a solid […]