In a new interview with BODS Mayhem Hour, ANTHRAX bassist Frank Bello discussed the progress of the writing sessions for the follow-up to 2016’s “For All Kings” album. Speaking about when fans can expect to see the new record released, Frank said (as transcribed by BLABBERMOUTH.NET): “If you think about it now, what’s going on, because we don’t know what’s gonna be closed down. Because everything’s crazy right now still with this new variant and all that stuff. So we have to play it right. So, from what I’m hearing, the promoters and everything else, tours and all that stuff… We’re doing periodic shows; I think we’re doing some festivals this year. But for touring, as far as that goes… You wanna release a record when you can tour, so you can support it. So that’s the plan for next year. So hopefully everybody’s healthy, we can all get out to shows and we can all stand next to each other. I’m hoping that all happens. So the plan is to release it next year and have everything followed up with a tour right away. That’s the way to do it right. ‘Cause you wanna support that record. You can’t just throw it out there and not have anything behind it, because how will people know you have a record out? There’s no radio or anything like that.”

According to Frank, promoting an album with a tour is an essential part of the record cycle and it’s something that he and his bandmates are looking forward to experiencing once again.

“There’s nothing like an energy with the live show,” he said. “We just did a livestream, and that was fun. It was great. It went over really well. A lot of people watched it, and it was a great, great thing; I enjoyed it. But there still is nothing like feeling the energy from the crowd feeding us. We’re feeding you, and we have this one big energy together creating this vibe. There’s nothing like that in the world. So, for me, I can’t wait to get back to that.

“We had a show last [month] in Cadott, Wisconsin — we played a festival — and it was great,” he continued. “It was great to get back to it. It was also a hundred and fifteen degrees on stage, it felt like. ‘Cause the sun was right on us; it was blaring. But it was still fun, it was still great to get back on and taste it a little bit. And for all of us, just to give everybody a little hope, it’s right there. We’ll get there. It’s right there. And hopefully we’re gonna get over this hump, and everybody gets healthy soon.”

ANTHRAX is celebrating its 40th anniversary in 2021 with a number of special activities and events. Formed by Ian and bassist Dan Lilker in Queens, New York on July 18, 1981, ANTHRAX was one of the first thrash metal bands to emerge from the East Coast and quickly became regarded as a leader in the genre alongside METALLICA, SLAYER and MEGADETH. 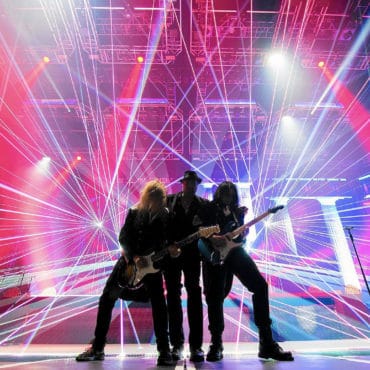 Multi-platinum, progressive rock group TRANS-SIBERIAN ORCHESTRA (TSO) has announced its highly anticipated winter 2021 tour. In celebration of the 25th anniversary of the group's landmark album "Christmas Eve And Other Stories", this year's multi-sensory extravaganza kicks off on Wednesday, November 17 with performances in Green Bay and Council Bluffs, and will visit 59 cities for 99 performances across America before concluding on Thursday, December 30 in Cleveland and St. Louis. Certified three times […]